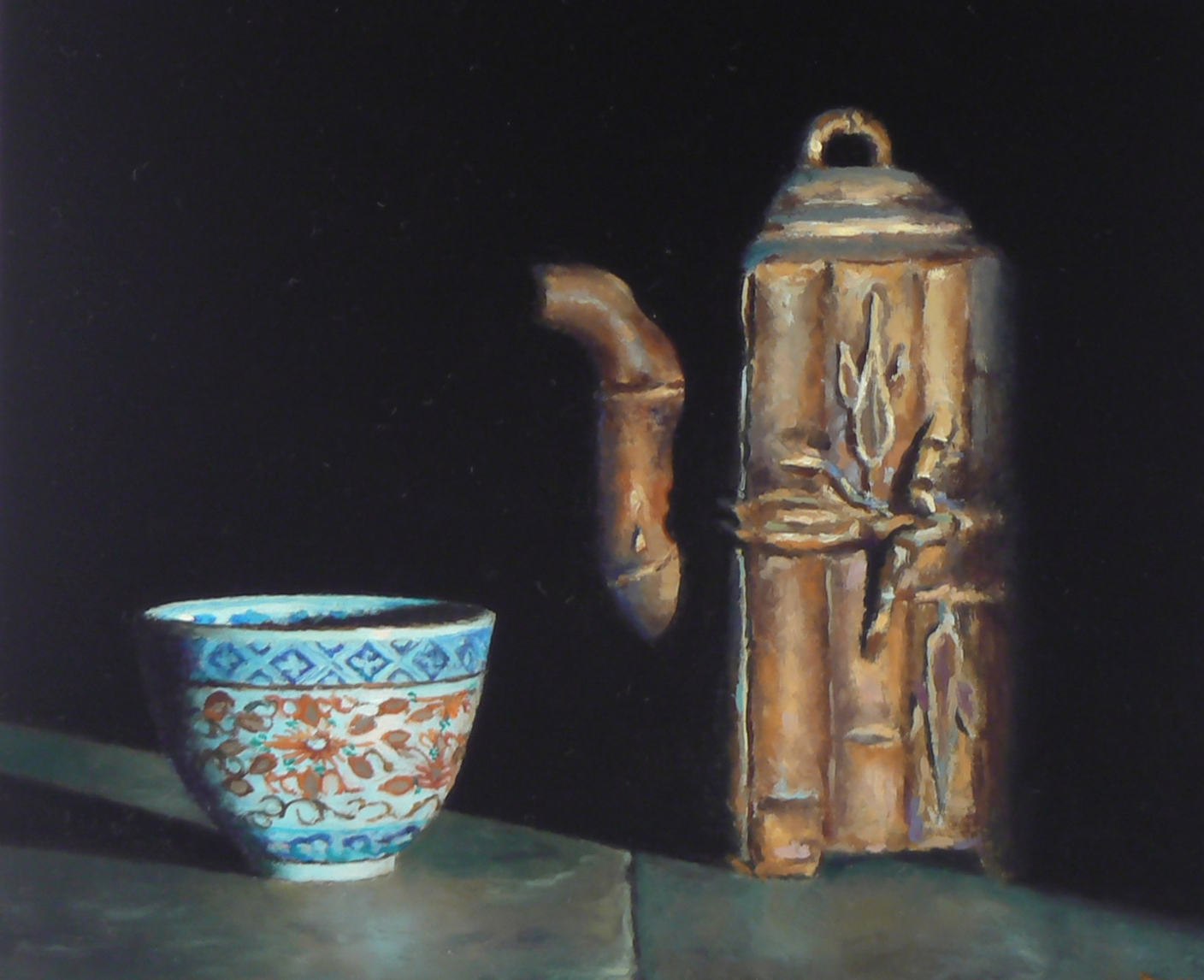 Artists who paint like this often talk about creating a sense of “lost and found”.

This refers to what happens at the edges of the objects and where shadows begin.

Rather than creating a clear silhouette all around an object, an artist might choose to have parts of the object disappear into the background.

This is done by blurring edges so much they disappear, allowing one object to meld into another.

It’s also accomplished by intense shadow effects, like in this painting. The entire left side of the teapot and the spout seem to vanish into the darkness.

It provides a more natural, realistic look to the painting. For instance, when we look at a stand of trees, we aren’t really perceiving each individual tree as a “cutout” image that’s been pasted into a group of other cutout trees.

Instead, we simply see a large, unified form (the entire stand of trees) made up of many smaller forms (individual trunks, branches, leaves) all combining, overlapping, and flowing into each other – so that it’s often impossible to say where one tree ends and another begins.

Lost and found creates a convincing sense of three dimensions. When an edge is lost, it appears to recede. Objects receding into the background creates a palpable sense of space and distance that a sharp edge would never convey.

Through the principle of contrast, a lost edge on one side of an object can strength and draw attention to a hard edge on the other side of the object – which might be where the artist wishes to direct your view for one reason or another.

Finally, lost edges can create an elusive, elegant feeling, that is suggestive rather than declarative.

In fact, Da Vinci had a name for this. He called it Sfumato – “smoky”. It’s that soft, hazy blending around the edges of things that often give his paintings such a mysterious and bewitching quality.

The next time you look at one of your favorite paintings, try to see if the artist has made use of lost and found edges, and then try to see if that gives a greater sense of space and realism to the work.

Note:  This painting was purchased by a subscriber to my email list.  Subscribers are given the opportunity to see new paintings first before they are shown anywhere else.  To subscribe to the list, please click here.

On Painting, Other Artists, Still Life Paintings, Techniques of Painting

My Process in Detail

Still life is a quiet art form - it's right there in the name itself.

A good still life painting draws the viewer into a calm, centered place, allowing silence to arise while the outside world falls away for a little while.

If it makes me feel like time has stopped while I'm looking at it, I know it's a good still life.

If one of my own paintings gives the viewer that experience, then it has succeeded.