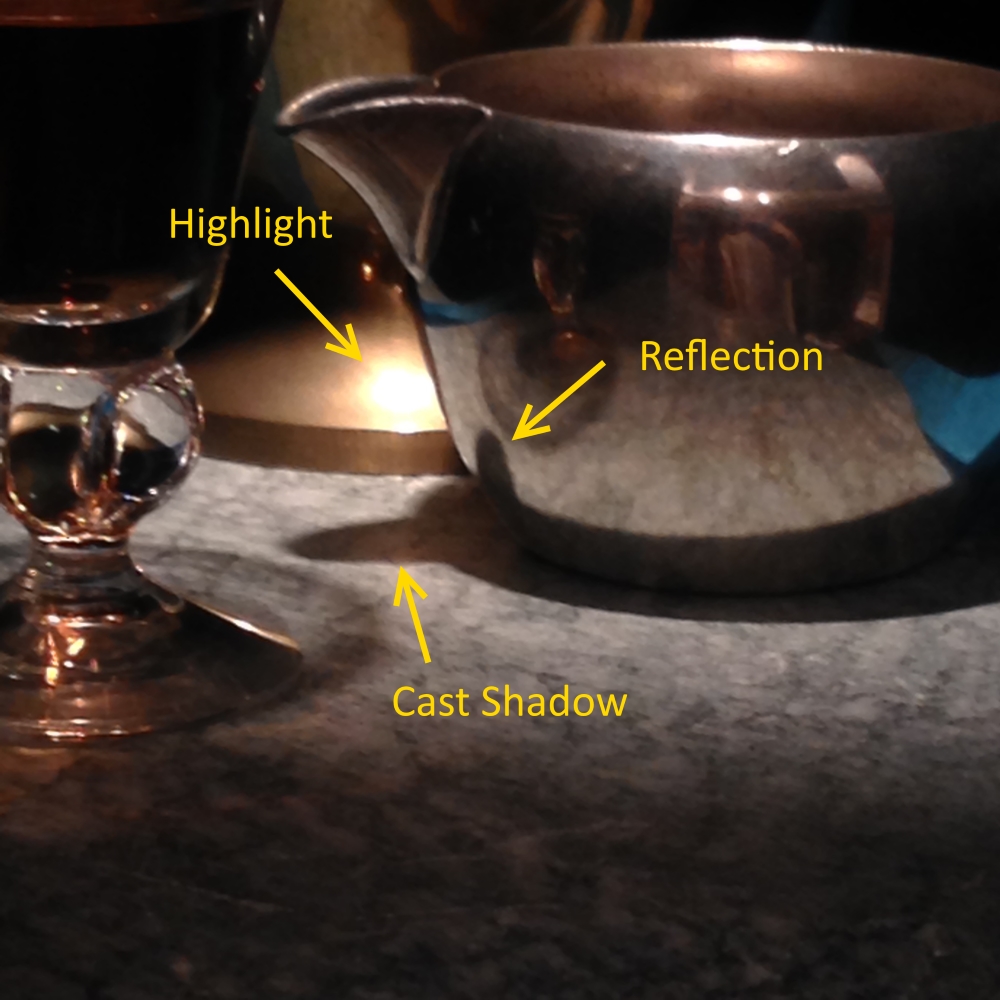 While painting a particular passage today, I noticed that the reflection of a cast shadow in a piece of silver was substantially darker than the shadow itself.  I could see that the cast shadow was being illuminated by the reflection onto the stone of a strong highlight immediately behind it.  I also knew that there is always some darkening in a reflection – no mirror is perfect.

But… this is polished silver, and as you can see in the above image, the reflection of everything else is only a little bit darker than the originals.  And yet, the discrepancy between the shadow and its reflection is clear.

It did not seem physically possible that the reflection should be so different from the shadow itself.

And then it occurred to me – the reflection of the highlight on the brass intersects (and brightens) the shadow from my point of view.  The silver creamer is in a different position than I was, and it was probably faithfully reporting what it saw from its point of view.

Sure enough, when changing my position to move closer to creamer, the shadow appeared every bit as dark as its reflection would suggest.

The highlight on the brass is still there.  It’s having every bit as strong an effect on its surrounds as I could see originally, it’s just reflecting at a different angle from the creamer’s perspective, and therefore not brightening the shadow, at all.

So that’s the technical explanation, and it was fun to figure out.  But, it still leaves the question of how to paint it – as it actually is, or as the eye thinks it should be.

I originally got to thinking about this because it looked so wrong to me.  Painting it accurately would reproduce something that appears incorrect on the surface, and I can hardly expect most viewers to take the time to puzzle this out like I have.

One can imagine a painting built to feature such inconsistencies, but this is not that painting.  It’s a fairly small detail, and most viewers would probably think I just made a mistake.

Sometimes we sacrifice accuracy for harmony.

What do I listen to while painting?

Still life is a quiet art form - it's right there in the name itself.

A good still life painting draws the viewer into a calm, centered place, allowing silence to arise while the outside world falls away for a little while.

If it makes me feel like time has stopped while I'm looking at it, I know it's a good still life.

If one of my own paintings gives the viewer that experience, then it has succeeded.